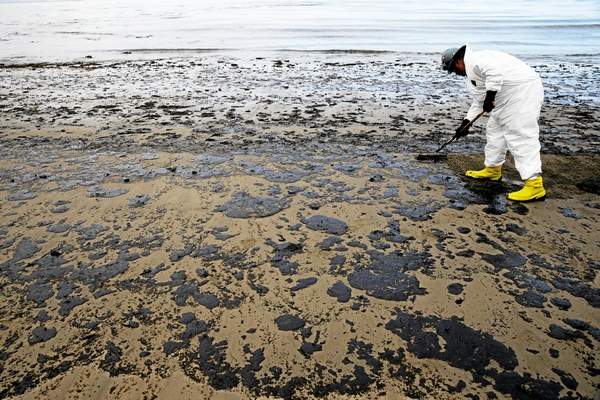 Growing up, my family and I lived in pretty close quarters with shared bedrooms, shared bathrooms, and plenty of kids running around. I guess you could say we figured out how to make do with what we had, but we didn’t have a lot. We were lucky, though, that we lived close to the bus stop at Carson and Normandie.

While we spent plenty of time at the Carson pool on hot summer days, that bus was a unique escape from our neighborhood to ocean.

My sisters and I traveled with rice and bean burritos that our mom packed. When we got to the beach we had everything we needed to create endlessly fun adventures of running and playing and swimming in the ocean.

Today, though, the ocean oasis that has provided decades of family-friendly fun for adults and kids throughout Southern California is never more than one disaster away from disappearing altogether.

On a recent Tuesday night in Santa Barbara County we were given a demonstration of just how quickly that can happen. Officials estimate that nearly 105,000 gallons of crude oil may have spilled into Santa Barbara County and nearly 21,000 gallons of it spilled into the ocean. The damage has been significant, not only to the ocean and the beaches, but also to local businesses that operate on or near the coast.

For my friends and their families who live up there, I’m sad that they have lost a playground, marine life and a place to dream. Instead, they are left with oily beaches and a messy recovery effort. That’s devastating and, for me, it underscores just how important it is for us to fight to protect our oceans and our beaches.

I have experience with that fight firsthand. I helped lead the charge against Measure O in the South Bay.

When a Bakersfield-based oil company wanted to drill into the Santa Monica Bay, I got involved. An oil company tried to lift a longtime ban on oil drilling, putting at risk our beaches used by families everywhere from Wilmington, Carson, Compton and other nearby cities, but we organized local residents and said no.

Not surprisingly the oil company went to great lengths to silence us and buy the result they wanted by throwing more money into the election than we could ever raise ourselves. They spent about $2 million in two months compared to our $150,000. Despite that, we were able to hold them back. That’s because when individuals are willing to stand with their neighbors against powerful forces like Big Oil, they can win.

Today I believe it’s more important than ever to embrace that lesson. We can continue to win on behalf of all the generations of kids who deserve to go to beaches that are soaked with sunshine, not oil that has leaked from drilling platforms and pipelines.

Spills like those in Santa Barbara and the rising number of asthma and cancer cases in our communities remind me why we need to move toward adding clean, green, union jobs to our communities. We need jobs that are long lasting, jobs that ensure cleaner air so our children are not destined to have inhalers around their necks and asthma from the air pollution, a sight I’ve seen firsthand.

For those reasons, and many more, I don’t think that elected officials should take a dime from oil companies. The companies responsible for the tragedy in California this week, and in the Gulf of Mexico years ago, or the many spills that happen every year, don’t need any more representation in Washington. They have plenty of people on their payroll to fight for them.

I encourage everyone who shares my passion for our beaches, our ocean and our iconic coastline to get involved and make a difference. Whether it’s signing a petition, giving your time or casting a vote, your actions matter. And after what we saw happen in Santa Barbara last week, your actions are in great demand.

Though I know we have many fights ahead, it truly fills my heart to know that the bus I used to board every summer still stops at Carson and Normandie and again at the Redondo Beach Pier. And when its doors open, a new generation flows through its doors and onto the beach in a summer ritual that I hope never ends. There is a lot worth fighting for — but I can’t think of anything more important than that.

Nanette Barragán is a member of the Hermosa Beach City Council and a 2016 Democratic candidate for the 44th Congressional District.