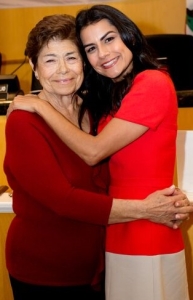 “Today marks the 50th anniversary of Medicaid and Medicare, programs that have provided a safety net to millions of seniors and other taxpayers since their enactment. Republicans such as Jeb Bush have recently suggested phasing out these programs, but cutting the benefits they provide or slashing their funding. Both Medicare and Medicaid are essential to keeping our seniors – our parents and grandparents – and the most vulnerable among us, including the poor, healthy. Instead of figuring out how to dismantle these programs, we need to figure out how to strengthen them, so that they will be in place for years to come.”

JEB BUSH WANTS TO “PHASE OUT” MEDICARE. At a recent event sponsored by the Koch brothers’ Americans for Prosperity in Manchester, New Hampshire, Jeb Bush said: “We need to make sure we fulfill the commitment to people that have already received the benefits, that are receiving the benefits,” Bush said. “But we need to figure out a way to phase out this program for others and move to a new system that allows them to have something, because they’re not going to have anything.”