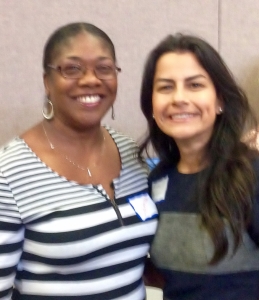 “Latrice Carter is the very definition of the title ‘community leader’,” said Barragán.  “She works tirelessly for her community, she never stops fighting to improve the lives of the people around her, and she proves that a single person has the power to deliver significant change.  I could not be more proud to have her support.  Whether it’s protecting our environment from fracking and oil drilling or speaking up for those whose voices are not often heard, she is a champion for Carson and I look forward to working with her for years to come.”
Carter works with a group of community leaders in Carson to put an end to practices such as oil drilling and fracking in the Carson community. Citing Nanette’s leadership and forward thinking ideas on environmental issues, Carter encouraged other community leaders to support Barragán’s campaign.

“We need leaders like Nanette Barragán who are willing to put the interests of the people ahead of the interests of the powerful corporations and their bottom-line thinking,” said Carter.  “Congress needs leaders who are unafraid of taking on the Goliaths of Washington, DC.  Nanette is someone who I know will stand out front on the issues important to Carson, and someone who I know will be a voice for us in Washington.”