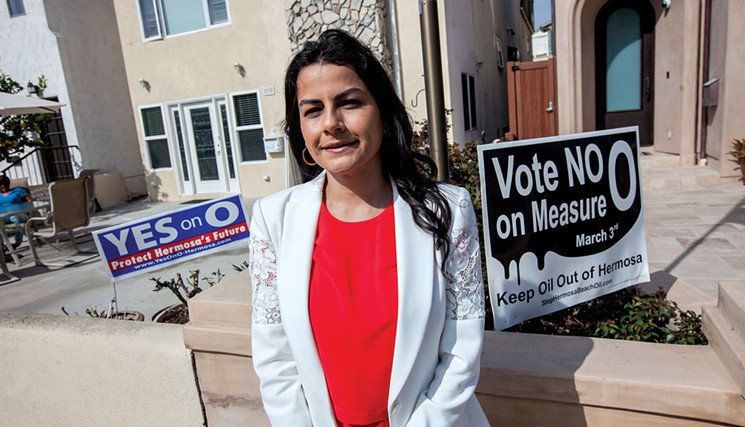 Nanette Barragan grew up in the rough Harbor Gateway section of L.A., the youngest of four daughters of Mexican immigrants. Her mother was a factory worker, her dad a TV repairman. On hot summer afternoons she and her sisters took the bus to Hermosa Beach and marveled at the beautiful town on Santa Monica Bay. “I thought it was a town where only rich and successful people lived,” she recalls. “I couldn’t imagine me living here.”

But two decades later, after working her way through USC Law School while racking up huge student loans, she became a lawyer, and in 2008 she bought a 1950s cottage in Hermosa. In 2012 she learned that the city council was going to place a measure on the ballot asking voters to lift a longtime local ban on oil drilling beneath the bay. If voters upheld the ban, as most assumed would happen, Hermosa Beach would be forced to hand oil producer E&B Natural Resources of Bakersfield some $17.5 million in compensation — a lot, given that Hermosa’s annual operating budget is about $40 million.

Now, the oil drilling ban question is finally appearing on the ballot, on March 3, and Barragan is no longer just a homeowner. She has fought to protect the famed surfing shore from what she sees as wildly incompatible oil drilling, and is so passionate about it that in 2013 she ran for Hermosa Beach City Council. She was a political neophyte with little chance of winning office, but E&B saw her rising voice as trouble. The firm asked the Hermosa city attorney to agree that if Nanette Barragan got elected, the fine print in existing California law banned Barragan from voting on the oil drilling issue — because her cottage is within 500 feet of E&B’s drilling site.

But Barragan outfoxed the oil company attorneys. She found a “small-town exception” in the fine print that narrowed the range down to 300 feet; her cottage sits outside that range.

“I was surprised at the lengths the oil company would go, trying to prevent my election,” she tells L.A. Weekly. “And after the election, they tried to stifle my First Amendment rights.”